Set Up Utilities Help for Renters Guides for Buyers Handy Moving Tips Off to Uni? Moving to the UK?

What Is a Tenancy Agreement?

After spending your time browsing rental websites to find your perfect home, you’ve probably come to the point where you’re all ready to start moving. Before you do, you should know exactly what you’re signing up for!

The tenancy agreement will usually cover every aspect of the tenancy, including:

Whenever you’re in doubt about your tenancy, you should always check your agreement to see what it says. 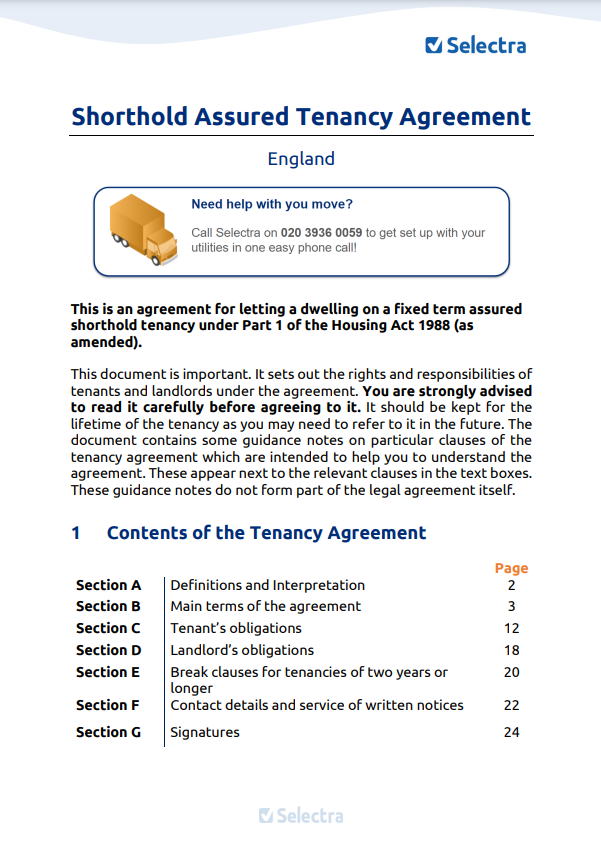 Can a Tenancy Agreement Be Verbal?

A tenancy agreement can also be a verbal contract which is also legally binding. You can agree the terms of your tenancy with your landlord without having to write it down.

This can be a problem however since you might not be able to prove things if you’re having problems, so it’s best to at least have some written evidence such as a text message or an email. If you’re renting a council house, you’ll generally have a written tenancy agreement.

Expressed terms usually include all the terms that are written down in the tenancy agreement. These are not necessarily the legal requirements, but they are the rules that you have agreed privately with your landlord.

You might find that expressed terms are not explicit about certain aspects of the contract. For example, if your tenancy is defined as a 12 month contract and states it will roll over, it will be a fixed-term agreement even if it says otherwise.


What Needs To Be In a Tenancy Agreement?

A tenancy agreement needs to include all the details regarding the tenancy and the people involved. Failing to have this does not mean that the agreement is void, but it’s important to have the information there so your arrangements with the landlord can be referred to in the contract.

What Should Be in the Tenancy Agreement

Although there aren’t any specific illegal clauses that can be put into a tenancy agreement, it is possible for landlords to include unfair terms in the contract.

Here are some examples of unfair terms in a tenancy agreement:

Landlord cannot charge you fees! Landlords are not permitted to charge any fees for viewing or holding a property for you. You may only be charged for your rent, default fee, or an early termination fee. You might also be charged for replacing a lost key.

In addition to unfair terms, it is illegal for a landlord to discriminate against you because of your:

A landlord could break the law if they offer you worse terms or treat you disproportionately unfairly due to any of the above.

What Types of Tenancy Are There in the UK?

There are many different types of tenancy agreements that you can sign, but the most common for tenants is called an Assured Shorthold Tenancy which has been the standard contract since 1988 and has become the most widely used since 1998.

There are other types of tenancy agreements that are also available, so it’s important to know what the different ones are so you know what you’re dealing with.

You can also have contracts that stipulate whether you are part of a Rent to Buy programme for example.

Need moving boxes? Getting your move organised is so important to minimise your time and make sure packing and unpacking the removal van is easy. Moving boxes come in all shapes and sizes and there are great ways in which you save money for your move. Find out how to get good moving boxes for less by checking out our Moving Boxes guide!

How Do I Change My Tenancy Agreement?

Changing the tenancy agreement can be done at any time and there are no set rules regarding the legality of changing the contract. The only rule is that a change can only take place if both you and your landlord agree to the change. If you do make a change, a new contract should be drawn up to reflect the change.

What About Rent Changes?

You will usually have a specific set of clauses in your tenancy agreement that states when there is a rent review. This usually occurs every year on the day that your contract was signed and can only be changed at this point. If your landlord decides not to change your rent for whatever reason, then they will need your agreement to raise it later.

Can I End My Tenancy Agreement?

If you’ve just started your tenancy, it is usually expected that you serve at least 6 months in the property before you decide to leave. Some tenancy agreements will include a break clause where the conditions of leaving the property early are defined.

Worried about your status in the UK after Brexit? If you’ve started a tenancy agreement in the UK and you are from Europe, you might be worried if your Right to Rent has been affected by the UK’s withdrawal from the European Union.

Find out more in our EU Settlement Scheme guide!

David has worked at Selectra since March 2021 and is an expert on the UK utilities markets. He is currently working on the energy content and also regularly contributes the Selectra News section.

Check Out All Our Renting Guides...

What Is the Landlord and Tenant Act 1985?

What Is the Landlord and Tenant Act 1985?

What Is Rent To Buy?

What Is Rent To Buy?

The Complete How To Rent Guide 2022

The Complete How To Rent Guide 2022

The Best Rental Websites in the UK

The Best Rental Websites in the UK