Looking for a better broadband deal?

Boost Your Business with a Leased Line in 2022

How does a leased line increase business productivity? What is a leased line anyway? Also known as dedicated internet access or ethernet circuits, leased lines are in a league of their own when it comes to internet speed. Since your business depends on a fast, reliable internet connection you need to know exactly what options you have to get the best out of your broadband. This is what we’re here for - read on and thank us later.

What is a leased line?

A leased line is your very own internet connection, a direct link between your premises and the telephone exchange. This is different from ordinary broadband because the connection isn’t shared with anyone. Businesses with standard broadband internet connections have to share bandwidth with their neighbours, which causes network congestion at peak times.

Some of us are old enough to remember when the internet was referred to as the ‘information superhighway’. Well, nowadays that superhighway is pretty crowded. As we all know, too much traffic trying to get on the motorway means rush hour congestion and bottlenecks for everyone. 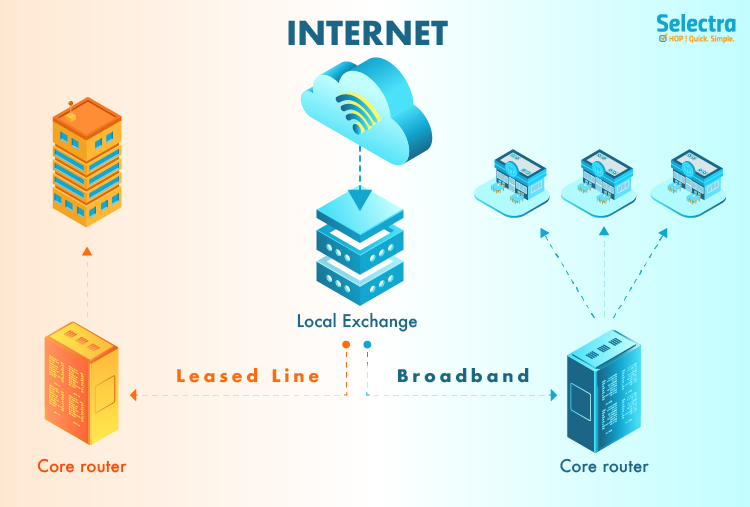 What if you had your own lane on the motorway? You could cruise around at top speed, never getting stuck in traffic jams and always arriving where you need to be on time. A leased line is the business broadband equivalent of your own exclusive motorway lane. Even better, there are never roadworks or closures - your leased line is always open and operating at top speed.

In contrast, leased lines are symmetrical; in other words, if your download speed is 100 Mbps, your upload speed is the same. This means that everyday business operations such as VOIP calls (Voice Over Internet Protocol), uploading large files and using remote access to connect to your servers will function consistently better.

As well as download and upload broadband speeds, a leased line also makes an enormous difference to latency (the time it takes for data requests and responses to make the round trip between devices, routers and back again). High latency is a problem for many businesses that can be solved by installing a leased line.

There’s no denying that installing a leased line is a considerable financial undertaking and it’s not a decision to be taken lightly. For many businesses, however, it more than pays for itself in increased productivity. If your business is suffering because of sluggish internet - maybe your staff are raising concerns that their work is hampered by slow connection speeds - then it's time to take action.

In leased line technical terms, specifying your bandwidth is known as choosing your circuit size. For example, with BTnet you can pay for a leased line with a maximum bandwidth of 10 Gbps (gigabits per second; 1 Gb = 1000 megabits) but only pay for a circuit size of 100 Mbps. Later, when your network connection requirements change you can upgrade to the next circuit size.

Leased line prices also depend on the length of contract you choose. Since there are substantial setup and installation charges, the shorter the contract, the higher the monthly cost. Leased line contracts typically last between three and five years. Shorter contracts of a year or two do exist but most companies opt for a longer commitment. If you think you’re going to move premises within a year or two, then it wouldn’t make sense to sign yourself up for five years.

Watch out for excess construction charges (ECC). After you place an order for a leased line your provider organises a site survey, which estimates the full installation costs. The survey outlines any ECCs, i.e. if extensive works are required to lay the line in the ground. You then have the chance to cancel the order if the ECCs are beyond your budget. It’s very similar to making an offer to buy a house and then withdrawing the offer after a full survey uncovers a host of previously unforeseen problems.

You can apply for a government grant to help towards the costs of installing a leased line. The Gigabit broadband voucher scheme operates through internet service providers; in other words, you ask your internet service provider (ISP) to make an application on your behalf. Click below to find out if your company is eligible for a grant of up to £2500 to get your superfast leased line set up.

Always read the small printWe’ve spotted some ISPs claiming they can arrange for up to £3000 of installation costs to be covered by the gigabit voucher scheme. It may be that they simply haven’t got around to updating their information, but it’s definitely the case that the maximum amount of money awarded through the scheme is a bit less than that, at £2500 per business.

Leased line providers: how do they measure up?

Service level agreements are part of the deal with all of these providers, which means you’ll be able to negotiate exactly what is included in the contract and what standards the ISP will adhere to. One of the quality benchmarks to help you compare different providers is the fault repair time specified in the SLA. Different from standard broadband plans, leased line providers give you an estimated time not just for responding to your request for technical help in the first place, but for resolving the problem completely.

As well as a business-class router and a service level agreement backed up by guarantees of high speed internet access free from interference from other internet traffic, what else do you get that’s superior to a standard broadband service?

BTnet Express and BTnet are the names of BT’s leased line service, part of the BT business broadband division. BTnet Express does not include the option of increasing bandwidth but instead is a fixed circuit size of 30 Mbps. The following features apply to the full BTnet service:

Is your business broadband letting you down?

Let us find you a faster, better deal that won't disappoint!

Spitfire's range of leased line products - under the umbrella term business ethernet circuits - covers everything from budget options with 10 Mbps bandwidth to top-of-the-range 1 Gbps packages. You might not have heard of them, but they were actually one of the first ISPs to provide broadband in the UK, back in 2000, and they've been going strong ever since. Here's what's included in Spitfire ethernet circuits:

Instead of using the existing network of telephone lines and exchanges, owned and operated by Openreach, Hyperoptic is creating its own brand new network from scratch. As well as business internet connections, they also offer ultrafast home broadband with the latest Fibre to the Premises (FTTP) technology. Here's what you get with a Hyperoptic leased line:

Ofcom intervenes Historically, access to Openreach’s network of telegraph poles and underground cables (the old BT network) has been tightly restricted. Ofcom has now given strong recommendations to open up the network, with a particular focus on improving the current fibre networks for business broadband. This means more competition in the business broadband market - good news for keeping prices down!

Does my business need a leased line?

If any of the following sounds familiar, the answer is yes, a leased line will really benfit your business:

Having said all that, smaller businesses might not be able to justify the costs of a leased line, especially if you are based in a rural area where installing your own dedicated internet access would be prohibitively expensive because of the distances involved between your premises and the nearest exchange.

What if my business can't afford a leased line?

Of course you still want to get the fastest internet connection speeds you can afford so your business stays competitive. For retail and restaurant operations that use electronic point of sale systems it’s crucial to have a stable, reliable and fast connection, otherwise you run the risk not only of losing money through dropped transactions, but also alienating your customers by keeping them waiting.

Leased lines and static IP addresses often go hand in hand. Both of these technical features are a boost for download and upload speeds and maintaining a stable connection. You might not be able to afford a leased line but it’s possible that a static IP address is within your reach. It could really help your internet connectivity and have a positive impact on your productivity.

Take our broadband speed test to see how your current connection speed measures up. If you think it’s too slow try these solutions to increase your internet speed. Plus check out the best small business broadband deals.

Robert has been at selectra for over a year, and worked as one of our Expert Energy Advisors helping customers. He is well versed in UK energy and broadband markets and now writes web content for our online visitors.